The Dominican Sisters of St Catherine of Siena hosted their first General Chapter at their Generalate (Motherhouse) in Barataria- the first in Trinidad during the period Saturday 4th – Monday 13th August 2012. 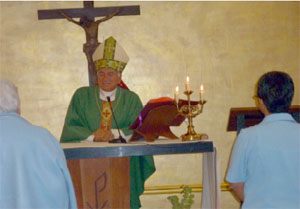 Present at the Chapter were Prioress General Sr.Jeannette Léger, one sister from Guadeloupe, five from France and six  from Trinidad.  These delegates were charged with the responsibility of charting the way forward for the life and future of the Congregation. The sessions were guided by Sr. Mary Ellen O’ Grady OP ( Sinsinawa) and Brother Daniel Cadrin OP.  The Canon Law expert present was Fr Francis Morrissey OMI.  The interpreters were Sr. Phyllis Wharfe SJC and Ms. Lisette Khan which allowed for greater ease in communication.

The actual deliberations of the General Chapter were preceded by two days of retreat guided by Sr. María Fabiola Velásquez Maya OP Maya OP who is the coordinator of the Dominican Sisters International (DSI)  an umbrella organization that facilitates collaboration between 151 Dominican Congregations consisting of  24,500 Dominican sisters based in 110 countries. This retreat allowed the sisters, associates and Br.Daniel to reflect on the theme of the General 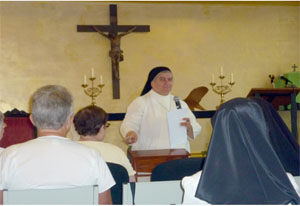 Chapter –   ‘Fired by the Spirit, let us dare to preach’. Sr. Fabiola explored the work of the Holy Spirit in the old and new testament, the work of the Holy Spirit in  St. Paul and in the Church.  Sr. Fabiola also delved into the encounters that Jesus had with various women in the bible such as the Samaritan Woman and Mary Magdalene. It is Sr. Fabiola’s passion and zeal for sharing the word of God that touched the sisters present and left a deep impression on them. Reminding them that the Holy Spirit is at work in each of our lives and that we are called everyday to “contemplate and to share with other the fruit of our contemplation.”

At the end of the day one of the retreat Saturday 4th August Apostolic Nuncio Archbishop Nicola Girasoli celebrated his first mass with the sisters and associates. He expressed his gratitude to the sisters for the work that they have done in the Archdiocese. He also went on to remind the sisters that religious are icons- living reminders of the presence of the Lord. The last day of the retreat – Sunday 5th August ended with a para-liturgy entitled ‘Embracing Hope” which included a ceremony of light during which the  sisters remembered the thirteen sisters who died since the last General Chapter in 2008. Sr Phyllis who was present with the sisters was also invited to light a candle for Sr. Rosa Pantin SJC who passed away the previous day. 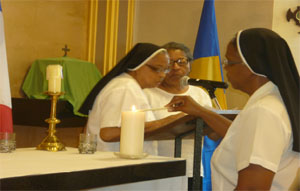 St Dominic’s Feast Day celebrations which took place on Wednesday 8th August had a very special flavour this year as the Chapter delegates took a break to celebrate the Feast day with the Dominican friars, sisters and associates at the Holy Cross Chapel in Arima. Fr.Hudlin preached an inspirational homily that invited those present to become “courageous followers…who do not give up because they face criticism…or because success is slow. Courageous Followers know that the grace of God is present in our midst.” He urged his listeners to “recognize fragments of salvation wherever they show up. He ended his homily by stating that the “ Dominican spirit never gives up – we re-organize, there is new power.

We seek to catch a glimpse of becoming something better, courageous followers re-think, re-cognize and re-know who we are and whose we are. ” After mass the sisters and their guests went across to the Novitiate house where they were treated to a sumptuous meal.  Calvary Hill came alive with the sound of music as a number of 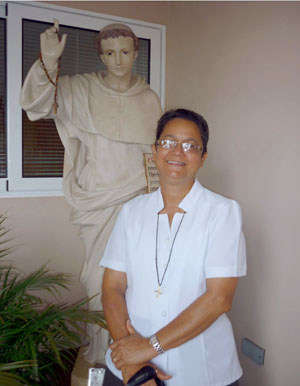 versatile acts consisting  of performances  by Sr. Paul Clarke and Sr. Marie Thérèse both doing calypso pieces, several French pieces were performed Srs. Kathy, Astrid, Godeline and Elise and Sr. Kathy performed her piece for the AEC Youth Assembly along with Sr. Carla and Ms. Lisette Khan. Talented instrumentalists Jeremey Chatoor on the flute and saxophone and Sr Aluna added a Caribbean flavour with their rendition of the timeless piece- Redemption Song by Bob Marley. The elderly sisters were not be outdone as Srs. Patrica and  Bernadette sang and danced to ‘ole lady walk a mile and a half and she tay-lay-lay- this was an infectious performance so much so the French sisters also joined and grooved to the melody.

On Friday 10th August the General Chapter held its first open session. During this first part of the session the sisters listened intently to summaries of the reports from the Prioress General and the councillors of the regions of Trinidad and France. The second part of the session created a space for groups of sisters to discuss the challenges that occurred in building relationships between sisters and associates, collaboration with our Dominican family and other religious institutions and the issue of formation. After very keen group discussion the sisters reported on their deliberations.

The chapter was indeed fired by the Spirit as the participants worshipped together at daily mass both in French and English and also very prayerful morning and evening prayers. It was also a time of great fellowship as sisters had meals together and shared their life experiences in a less formal way. The Dominican sisters would like to express gratitude to the priests who celebrated Eucharist – Fr. Gregory Augustine CSSp., Fr Stanilaw Gurgul OP, Fr. Urban Hudlin, Fr. Matt Ahye OP and Fr Dwight Black OP. 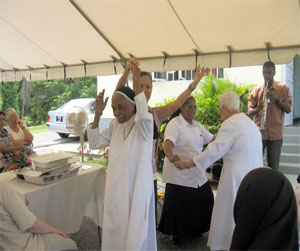 As the days of the Chapter draw to a close the words of the prophet Habakkuk’s in the reading of Saturday 11th August further confirmed the work of the chapter as he said “ write the vision down inscribe it on tablets to be easily read ” (Hab.2:2) Sr. Mary Ellen at this point also shared that the work of the Chapter was important in discerning one’s call to leadership in community and also as part of elected leadership. She reminded the Chapter delegates of the words of St. Catherine who said “discernment dissipates darkness”.  In this light and in a spirit of deep prayer the Chapter delegates entered into a time of deep prayer and silence. On Sunday 12th August the entire community of sisters gathered for mass celebrated by Fr Hudlin during which the Holy Spirit was invoked as the one who will guide the Election process. Shortly after mass and in a closed session the delegates elected a new Prioress General in the person of Sr. Therese Antoine who thanked the sisters for their vote of confidence. 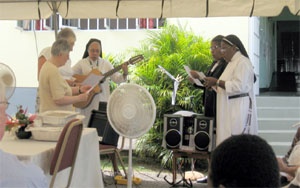 This was followed by lunch and a time of fellowship amongst the sisters. The last day of the Chapter allowed for the election of three General Councillors who will serve with Sr. Therese Antoine. It was also a time of thanksgiving for all those whose hardwork prior and during the Chapter made it the success that it was. Perhaps now each sister will continue to commit to the work that is at hand the building up of God’s Kingdom. We pray that St. Dominic and St Catherine will continue to intercede for all of us as we pray to be fired by the spirit and daring to preach in our various spaces and in the many encounters that we have as Dominican sisters.